And while tartar is usually pale to dark yellow in colour, it can sometimes turn dark grey or black. Naturally, seeing black tartar on your teeth can leave you feeling worried that you have a serious problem. However, despite its colour, black tartar is no more harmful than yellow tartar, but you should remove it as soon as possible.

If you have noticed what looks like black tartar (calculus) on your teeth, the following information will help you to understand what causes it, and what you can do about it.

You usually see early-stage tartar around the bottoms of teeth, close to the gum line. In this early stage, tartar is generally yellow. However, if you fail to remove tartar in its earliest stage, it will worsen over time. This happens because plaque can cling to the rough surface of tartar more easily than it can to smooth enamel. As it worsens, tartar begins to extend under the gum line.

When tartar spreads under the gums, the result is mild gum disease or gingivitis. Gingivitis causes the gum tissue to bleed. The bleeding happens because tartar begins to destroy the gum tissue and the blood vessels below the gum line, and since tartar is porous, the resulting blood flow stains it and causes it to turn black.

If your diet is rich in heavily pigmented food and drinks, such as red pasta sauce, red wine and coffee, this may also stain tartar over time and cause it to turn dark brown or black. Smoking too might also stain tartar due to tartar's porous nature. Naturally, this leaves your teeth looking unsightly and unhealthy.

Black tartar looks similar to tooth decay. This is why you should see your dentist or hygienist as soon as possible. You need to confirm that what you are seeing is in fact tartar and not tooth decay. However, either way, your teeth and gums are in need of urgent dental treatment. If you do nothing, you could lose your teeth to gum disease or severe dental decay.

Have you noticed a black buildup between or on your teeth? Then book an appointment with a dentist. Whatever the cause, you need urgent dental treatment. 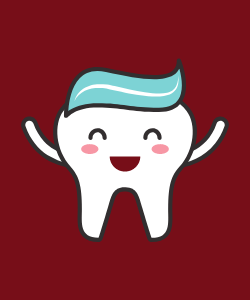 No one wants to experience a toothache, receding gums, or oral infections. Thankfully, there are things you can do which will help you to avoid dental problems. On this blog, we aren't dental professionals but we are committed to learning everything we can about dental health and oral hygiene. Many hours of research have gone into each of the articles on this blog so you can be certain that they will help you to look after your teeth and gums. We will be looking at subjects of correct brushing techniques, how to use dental floss, and signs of dental problems.